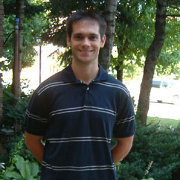 Kevin graduated from Michigan Technological University in May 2000 with a Bachelor’s degree in physics. He then spent the next two years working in the automotive industry for Visteon Corporation as a Test Engineer before deciding to pursue a Ph.D. Kevin’s PhD research involved  synthesizing and characterizing magnetic nanoparticles and studying their targeted uptaked into cancer cells.