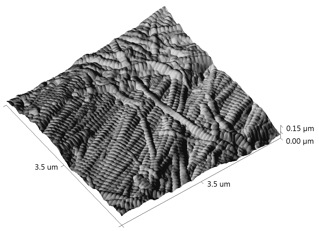 Collagen is the most common protein in the human body. It is present in bone, skin, teeth, tendon, cornea, artery wall and more. Collagen has a triple helical structure made up of 3 amino-acids all in alpha-helices, two being alpha-1 helices and the other an alpha-2 helix. The characteristic feature of collagen is a repeating triplet of Glycine-X-Y (X and Y being most commonly proline or hydroxyproline). These structures form into fibrils that consist of many staggered collagen molecules. The collagens form into fibrils because of cross-links between the molecules. This causes a period where the collagen molecules overlap, followed by a gap before the next collagen molecule. This is called the D-periodic gap/overlap spacing or “D-spacing.” The magnitude of the D-Spacing is sensitive to a number of factors including amino acid content of the collagen molecule and post-translational modification and thus is an interesting nanomorphological probe of overall assembly process. 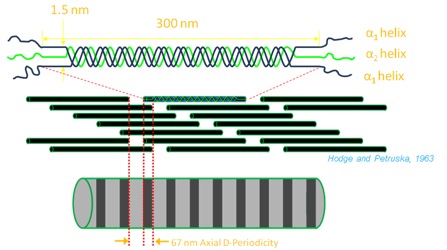 Our group has employed AFM to image collagen in bones, teeth, tendon, and skin to measure the D-spacing in a variety of species, including mice, sheep, rabbit, cow and human. Our research showed that there is a distribution in D-spacings of the Type 1 collagen in all four tissue types examined to date. We also have evidence showing that this distribution of D-periodic gap/overlap spacing can be altered by diseases. One such project looked into the effect of estrogen depletion. Bones of sheep that were ovariectomized and others that were sham-operated were both imaged for measurements of the D-periodic gap/overlap spacing. It was found that the diseased bones showed a difference in distribution of D-periodic gap/overlap spacing.  The bones are looked at under the AFM after a process of demineralization, using EDTA and sonication to expose the underlying collagen structure. The images are then analyzed based on the D-periodic gap/overlap spacings measured using 2D Fast Fourier Transform (FFT). This is more accurate than the conventional line scan profiling or 1D FFT because these methods are more influenced by human error. They both require the user to draw a line on the feature one wants to measure, and just a small change in angular orientation of that line can substantially change the readout. 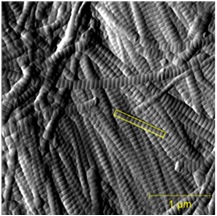 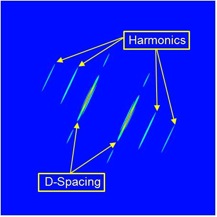 By analyzing many different collagen fibrils, we are able to develop histograms and cumulative density functions (CDFs) of the distribution of D-periodic gap/overlap spacing in collagen of both Ovariectomized (OVX) and sham-operated sheep.  A Kolmogorov-Smirnov test showed that there is a significant change in of D-periodic gap/overlap spacing distributions between the OVX bones and the sham-operated (p < 0.001). 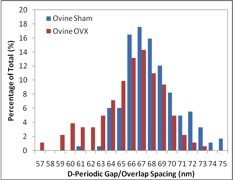 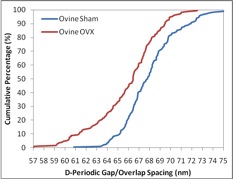 A summary of the group’s published papers in this area can be found here.

Some days, we find remarkable things under the scanning probe microscope