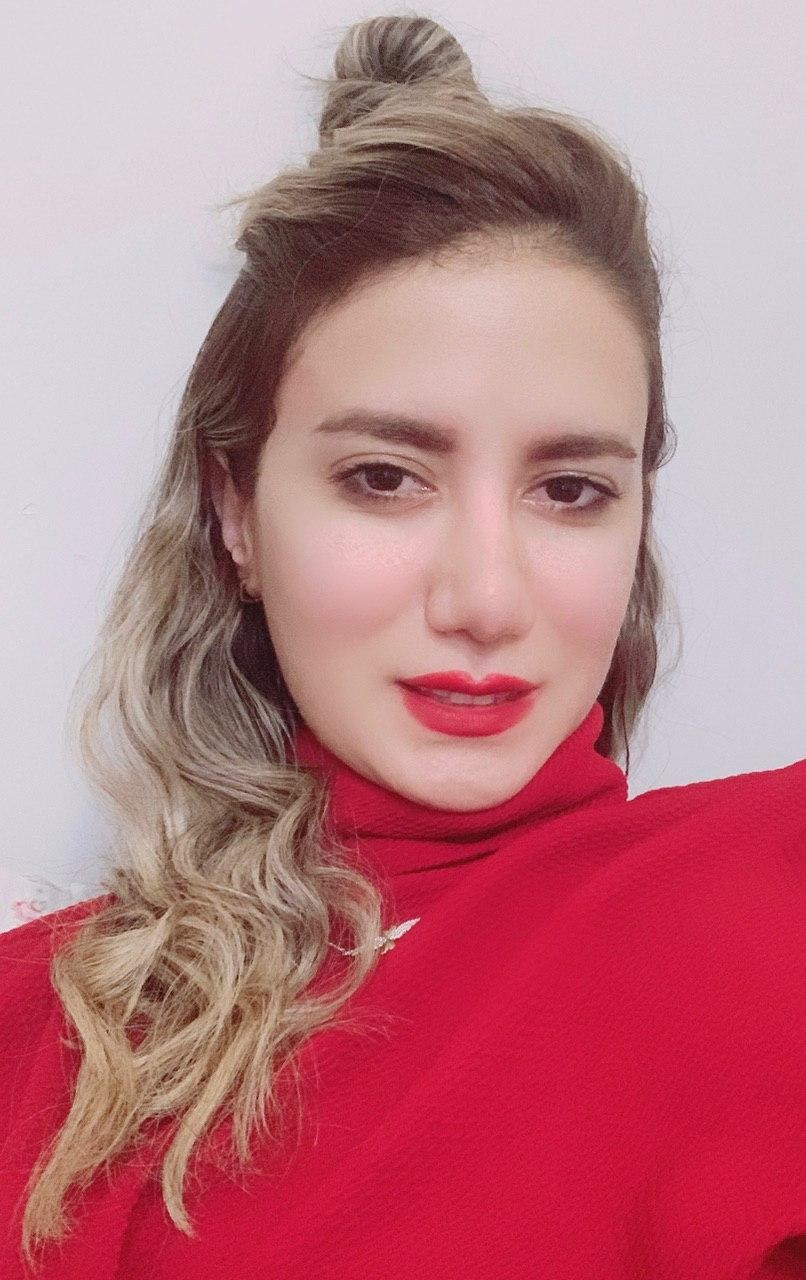 Mahdieh received her B.Sc. in Chemical Engineering from the Kermanshah University of Technology in 2014. She spent her time working in Nanoalvand pharmaceutical company (Tehran, Iran) as a quality control specialist for 18 months. After moving to Australia in 2018, She started working as a research assistant and teaching assistant at the chemical engineering department, Monash University. She worked with PhD researchers on environmental projects including recycling of nanocellulose. She started her PhD in Chemical Engineering at Monash University in 2020. Her PhD is an industrial-based project with the partnership of Paintback® and BASF. She is interested in designing environmentally sustainable processes. During her graduate research degree, she will work on the valorisation of waterborne acrylic paint.

She is interested in camping in nature, she likes Australia’s nature. Also, she watches movies during her spare time. 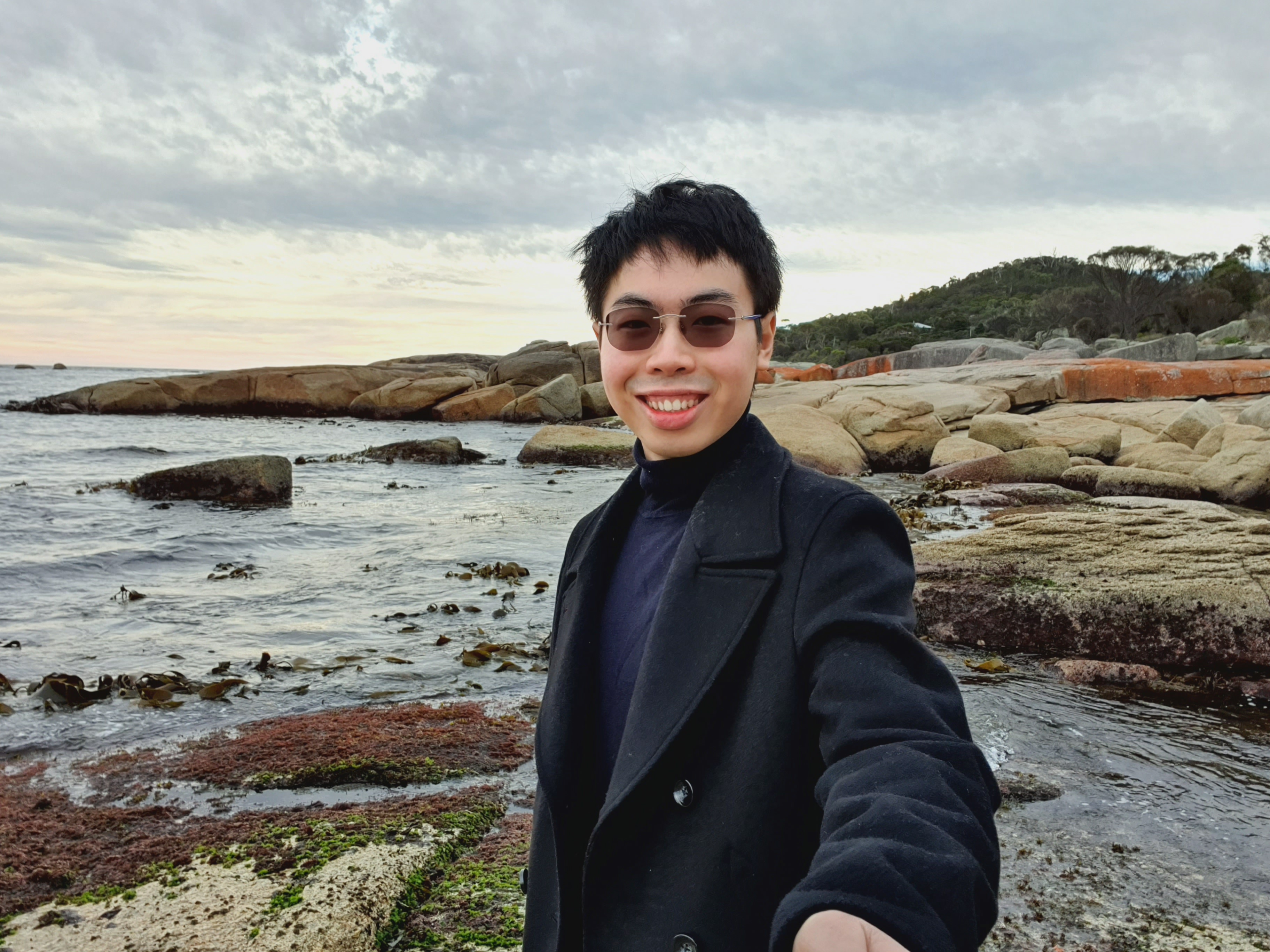 Kevin was born in Indonesia and left home to Australia in 2015 to pursue his undergrad study at Monash University. He received his B.Eng. (Hons) in Chemical Engineering from Monash in 2019. Being very interested in the Anterior Cruciate Ligament (ACL) research project that he worked on under the supervision of Professor Mark Banaszak Holl and Jinhee Kim during his final year of undergrad, he decided to pursue Ph.D. and joined the Banaszak Holl lab to continue doing research in that field after completing his undergraduate study. His Ph.D. research, co-supervised by Mark Banaszak Holl and Professor Victoria Haritos, will focus on domain morphology of damage induced to the human ACL as well as developing detection methods to prevent athletes from rupturing their ACL.
Outside of University, Kevin loves to go to the cinema to watch newly released movies of various genres including comedy, sci-fic and action. He is also a big sport fan of soccer and particularly interested in the English Premier League. 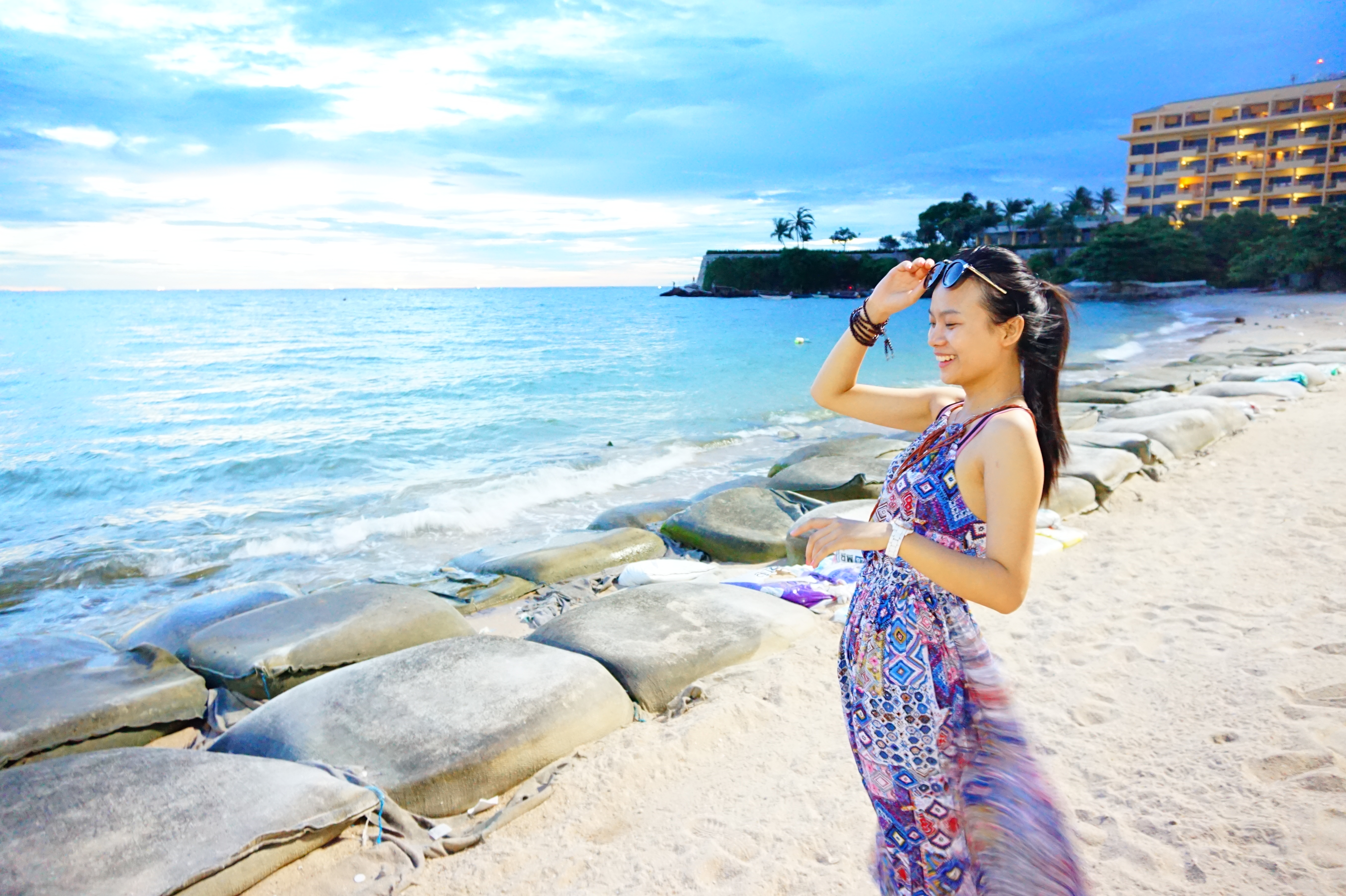 Ting graduated from Hubei University 2013 and earned her Master’s degree in Polymer Science from Zhejiang University in 2016. For her Master’s research, she designed a series of bio-probes for the detection of biomacromolecules such as DNA, heparin and HA. After a period of work in Huanan Industrial Technology Research Institute of Zhejiang University as an assistant engineer for cosmetic formula development, she has returned to academia as a PhD student at Monash University in September 2019, co-supervised by Professor Mark Banaszak Holl and Professor Xiwang Zhang. Her PhD research in the ARC Research Hub for Energy Efficient Separation focuses on the development of a membranes for biological applications. 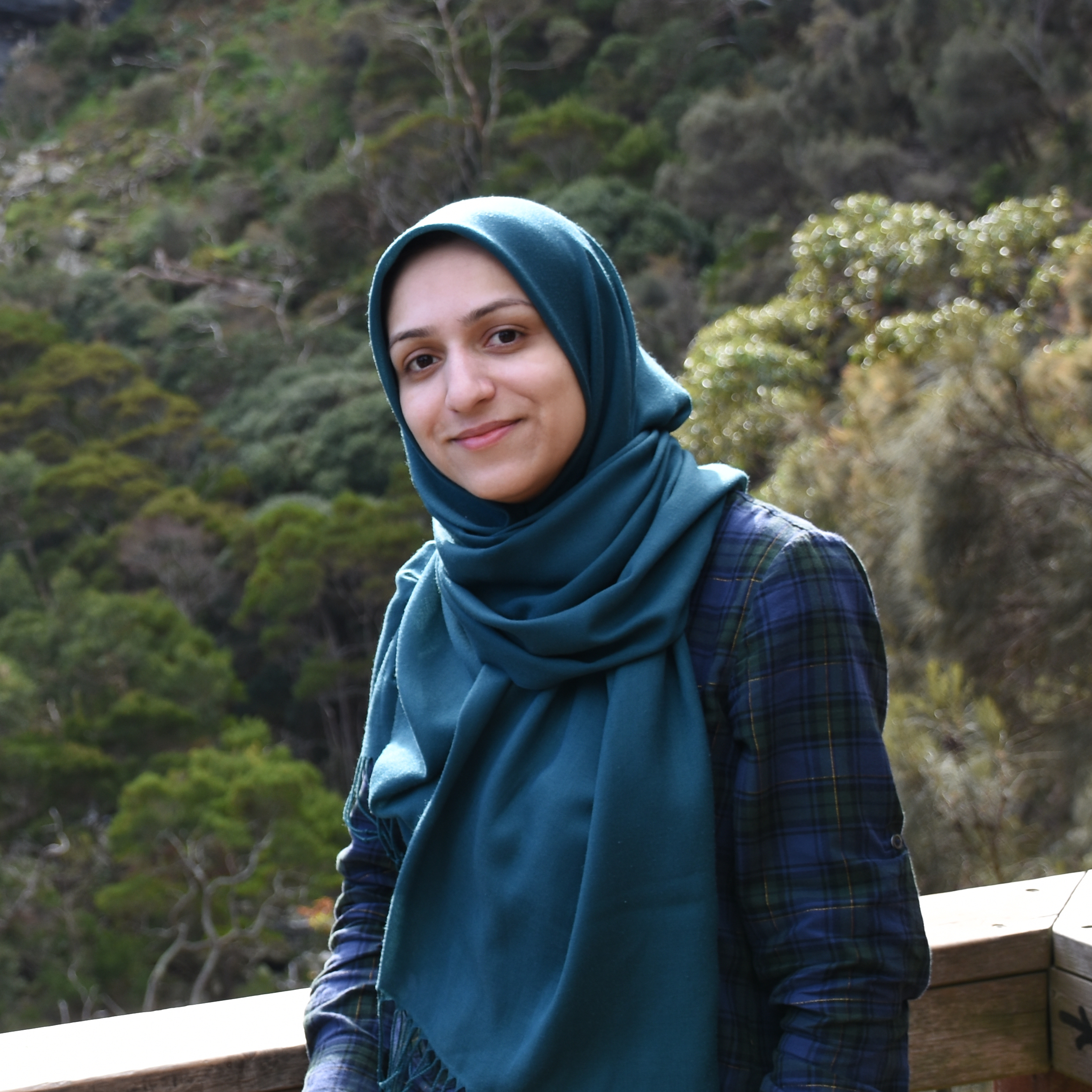 Hajar received her B.Sc. and M.Sc. in Chemical Engineering from Amirkabir University of Technology in 2012 and 2015 respectively. Her field of research in Master was wastewater treatment using a biological method. After graduation, she spent her time working in pharmaceutical research laboratories. She began her Ph.D. in Chemical Engineering at Monash University in 2019.
She is interested in applied pharmaceutical sciences. Thus, she joined the Banaszak Holl group. During her graduate research degree, she will work on folate binding protein (FBP) as a delivery agent for cancer treatment.
She is also expert in photography and spending her spare time doing voluntary work for children as well as bushwalking.

You can learn more about Hajar’s amazing contributions to COVID-19 diagnostic development. 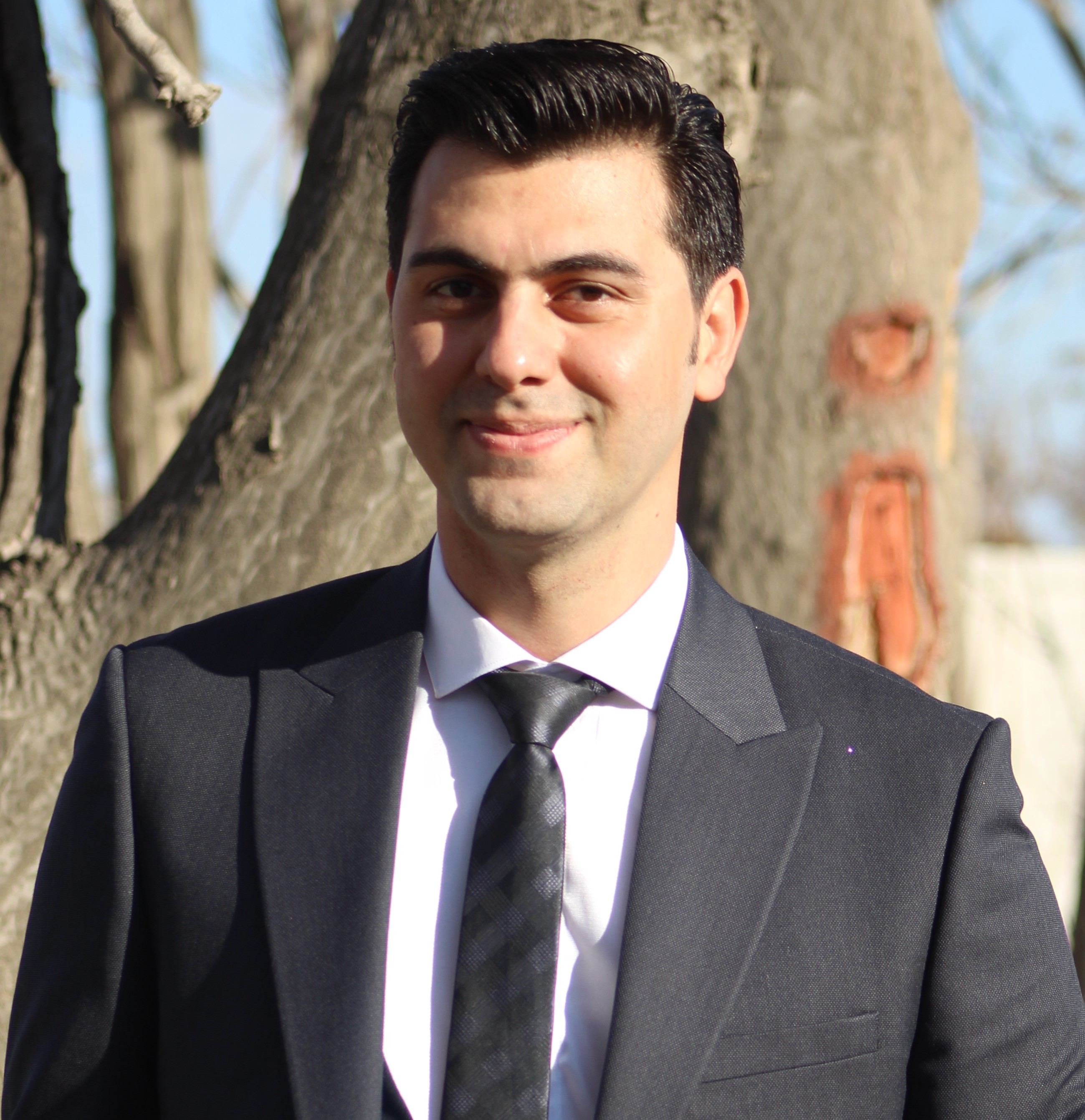 Mostafa received his B.Sc in Chemical Engineering (gas treatment) from Kermanshah University of Technology (KUT), Iran, in July 2014. For his M.Sc. research at the University of Kashan, he developed new polymeric membranes, mainly using the PEBAX polymers and nano-oxide materials as filler. He also prepared different functionalized materials for gas separation and used molecular simulation approach to simulated both diffusivity and solubility through polymeric mixed matrix membranes. He has also used molecular simulation to investigate adsorption processes for zeolite and oxide materials.

He began his Ph.D under supervision of Prof. Warren Batchelor and Prof. Mark Banaszak Holl at Monash University, Australia, in Sep. 2018. He will study Cellulose nanofiber composites for wastewater treatment by modification of these materials using the mesoporous oxide materials.

Outside of the lab, he is keen about research, sport and camping outside the city. He also is a fierce fan of movie and cinema.

Publications from B.Sc. and M.Sc work: 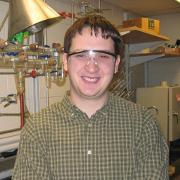 Ajdin Kavara is originally from Capljina, Bosnia and Hercegovinia.  He moved to Grand Rapids, Michigan in 1997 and obtained his B.S. in chemistry from Grand Valley State University in 2004.  He did undergraduate research with Prof. Kovacs on the heterogeneously catalyzed breakdown of sugars.  His PhD work is focused on CH-activation chemistry using Sn, applications of the products to cross-coupling chemistry, and novel approaches to natural products.

In 2009, Ajdin received the Peter A. S. Smith fellowship for research in synthetic organic or inorganic chemistry.

Ajdin was a post-doctoral associate in Pat Holland’s group at the University of Rochester and then an adjunct faculty member at Grand Valley State University.  Ajdin then moved to industry working at Pfizer and Jordi Labs.  He is currently working at Avitide, Inc. 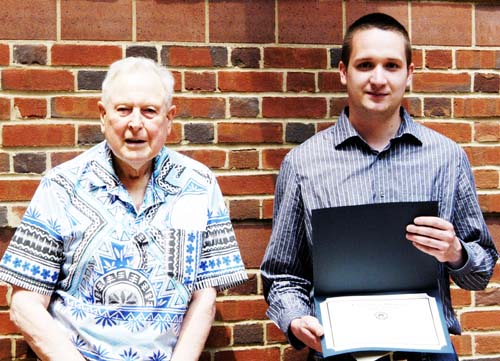 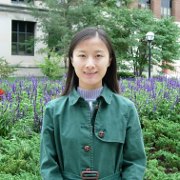 Jiumei was a double major at Tianjin University obtaining a Bachelors of Engineering in Polymer Materials and Engineering and a Bachelors of Arts in English.  She then obtained an MS in Materials Science and Engineering from Wayne State University.  She is now using patch clamp techniques to study the interactions between nanoparticles and biological membranes.  This work will help to provide an understanding of nanoparticle toxicity and the mechanism of DNA transfection. 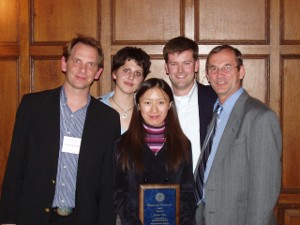 In October 2006, Jiumei won the prestigious Mayaterials Incorporated Award in recognition of her academic excellence in the Macromolecular Science and Engineering Center.  The award was presented at the banquet of the annual  symposium.  In the 2009, Jiumei won the Distinguished Achievement Award from the Macromolecular Science and Engineering Program. 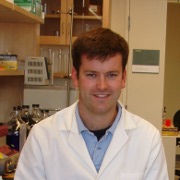 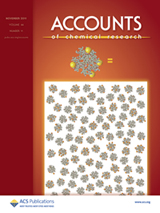 Doug spent a year as a Medical Innovation fellow at the University of Michigan’s medical school and then worked at MNIMBS as our technology translation specialist. 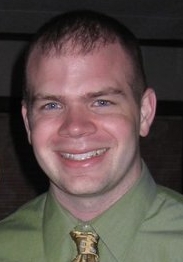 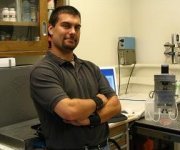 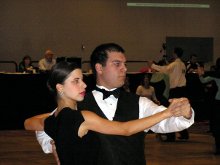 Blake graduated from the University of California, Santa Barbara in 2006.  He spent two years in Paul Hansma’s lab studying the fracture mechanics of trabecular bone.  His research at Michigan focused on dendrimer interactions with supported lipid bilayers and on AFM methods of measuring and analyzing Type I collagen.  Outside of the lab Blake spends most of his free time ballroom dancing.

He is currently Senior Systems Engineern at Prysm, Inc.

Rahul graduated from Panjab University, India in 2006 with a BE in Biotechnology. He is currently pursuing a PhD in Biomedical Engineering. He is characterizing the impact of dendrimer based drug delivery on mammalian cells, specifically the way these polymers and the polymer/DNA polyplexes interact with cell membranes and enter cells.

Rahul also has a substantial interest in translating ideas to the clinic and has also focused on invention. He was an active participant in the Ross Business School’s Dare to Dream program, the 2009 ASME Innovation Showcase (IShow) competition, and was recently a featured inventor at the University of Michigan’s annual Celebrate Inventation event. This event showcases inventors from all over campus and most typically highlights faculty led groups. Rahul’s invention, the Endocutter, was developed with a group of students originating from a project in a BME course. The Endocutter converts a traditional endoscope into a device that can cut up and remove blood clots, without damaging the stomach, making the identifical of bleeding areas in the stomach much more feasible and efficient. The invention can be viewed at http://www.youtube.com/watch?v=gxnB_kuzOsQ. This is wondeful example of biomedical innovation and points to Rahul’s powerful combination of strong science and engineering coupled with entrepreneurship.

Rahul is currently working at the University of Michigan medical school.

2008 Dare to Dream recipient (through University of Michigan Business School). 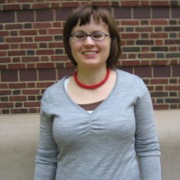 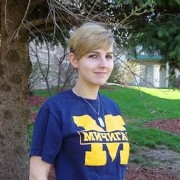 Ahleah graduated from the University of Cincinnati in 2006 with a B.S. in Chemistry.  As an undergraduate, she worked in the Gudmundsdottir lab synthesizing triplet vinyl azides.  Ahleah worked on Organometallic chemistry and the development and analysis of a new chemical hygiene curriculum for her thesis. She went on to get her Masters in Public Health at Michigan.

Ahleah worked as a Senior Associate at ENVIRON in the Air Sciences Practice and the Health Sciences Group. She worked on various aspects involving air dispersion modeling, regulatory compliance, toxic tort litigation and hearing conservation. Her work at ENVIRON has included assisting clients with technical analyses for litigation proceedings, conducting noise surveying and monitoring, and air quality and GHG regulatory compliance at the state and federal levels. Ahleah supported clients and worked with diverse industries such as consumer products, petroleum refining, manufacturing, and construction. 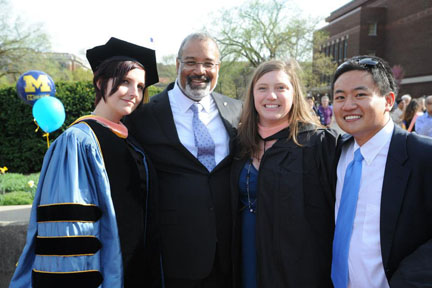 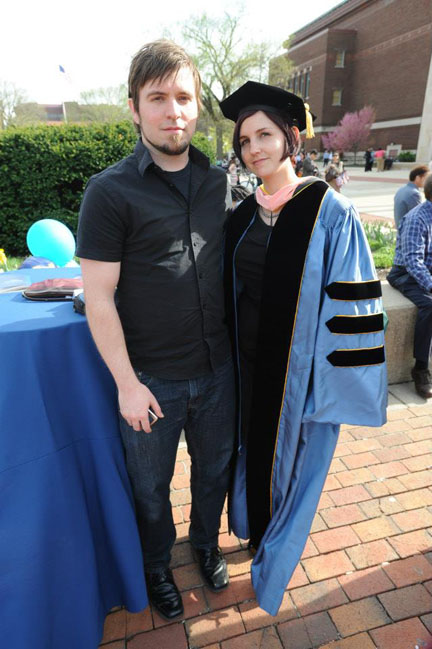 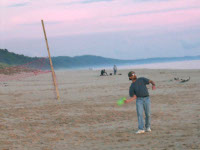 Jeff Bartolin received his B. S. in chemistry from Baldwin-Wallace College in 1999.  He was the second alumnus of that esteemed institution to join the research group!  Jeff pursued research in the area of organometallic chemistry. 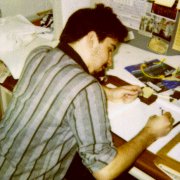 John, the holder of a prestigious NSF graduate fellowship, joined the group in December of 1993. His research focus was the organometallic chemistry of germanium.

John graduated with his PhD in the summer of 1998 and is now an associate professor of chemistry at Grand Valley State University. 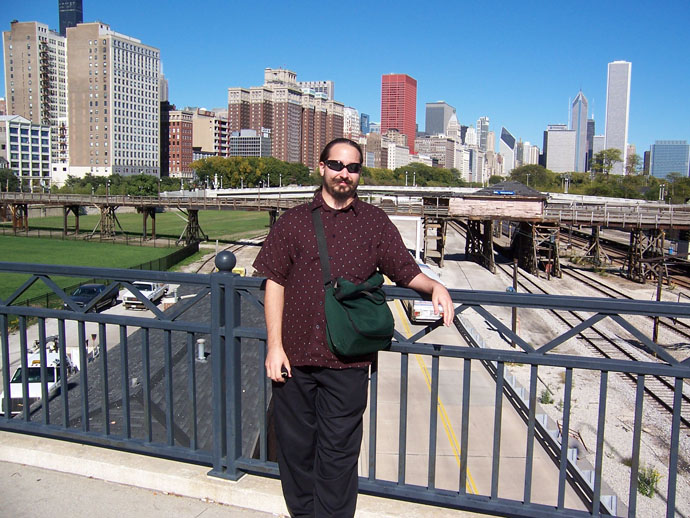 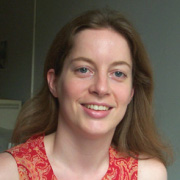 Almut graduated with a Diplom degree in physics from the University Tuebingen in Germany in 1997. Although she initially intended to obtain a Ph.D. in theoretical high energy physics from the University of Michigan, she switched fields in the summer of 2000 and joined the Banaszak Holl / Orr research group. During her Ph.D. research she studied the properties of branched polymers, called dendrimers, using both experimental and computational methods. She investigated how dendrimers interact with surfaces, in particular lipid membranes which serve as a model for cell membranes. Using an atomic force microscope she was able to observe the interaction of dendrimers with such membranes. The results showed how various properties of dendrimer molecules influence their ability to enter cells through the cell membrane. This information can help to design “smart” molecules that can be used to fight disease, for example by transporting drugs into specific cells. Almut graduated in 2004, and in April of 2005 was awarded the annual Terwilliger Prize for the best Ph.D. thesis in the University of Michigan Department of Physics. After graduation Almut continued her work with the Banaszak Holl / Orr group as a postdoc for six months and then as a postdoc at the University of Basel in Switzerland.   She currently works for Roche Pharmaceuticals. 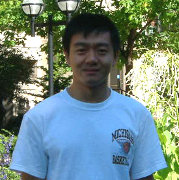 Song Ge obtained his B.S. from Shandong University in China. His research work employs SQUID imaging of magnetic nanoparticles as part of a larger project developing nanotherapeutics for cancer therapy. 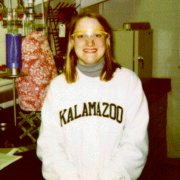 Leah obtained her Bachelor’s degree from Kalamazoo College.  She worked on the characterization of thin silicon oxide films. 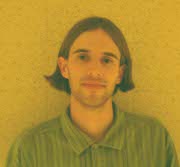 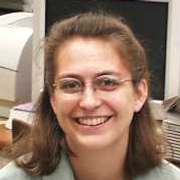 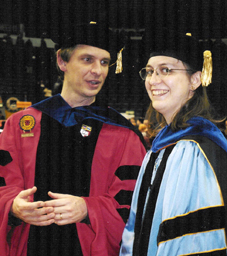 Karla graduated from the St. Olaf in the spring of 1997 with a B.A in chemistry and math.  During her time as a graduate student at Michigan she discovered novel intermolecular CH-insertion reactions and CH-activation reactions using germanium.  Karla completed a post-doc with Bill Trogler at UCSD.  She currently lives in San Diego.