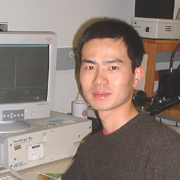 Haifeng earned his PhD in chemistry from Peking University. He then spent time as a post-doctoral associate at University of Leeds. He worked with us, in collaboration with Prof. Brian Clarkson of Dentistry, studying the crystallization of enamel crystals. After that, he continued his research in the School of Dentistry as a research investigator until 2006. He went back to China in 2006 and he is now an associate professor of Biomedical Engineering in Peking University.