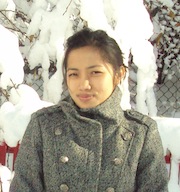 Anisha received a B.S. degree in Microbiology from Tribhuvan University, Nepal in 2008 and a B.S. degree in Chemistry from McNeese State University in May 2010. Prior to joining the graduate program at University of Michigan in fall 2011, she was involved in projects such as computational studies of the electronic structure of inorganic clusters, MALDI mass spectrometry, and synthesis of quantum dots. Anisha joined the Banaszak Holl group in 2012 as a joint student with Prof. Hashim Al-Hashimi. Her work focuses on studying the dynamics of the interaction between DNA/RNA and dendrimers.