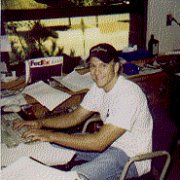 Chris worked in the lab during the summer of 1999.  He studied the low-temperature formation of silicon oxide thin films.